Procedure for the preparation and approval of PP1 Standards

Technical bodies involved in the preparation of PP1 Standards 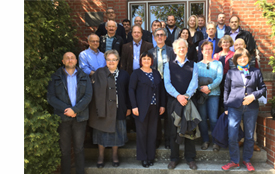 The development programme of PP1 Standards is carried out by three bodies within EPPO:

The Working Party decides the programme of work and approves the finalized Standards. It directs the Panels specifically to prepare draft Standards. The Secretariat organises and runs/chairs both Working Party and Panel meetings and has the responsibility to incorporate the changes proposed during the consultative phases of the procedure. The task of preparing efficacy evaluation Standards is only one of several areas of work for the Working Party, but is the principal task of the Panels. From 2008 the Panels have also been developing extrapolations tables linked to EPPO Standard PP 1/257 Efficacy and crop safety extrapolations for minor uses.

Details of the approval procedure 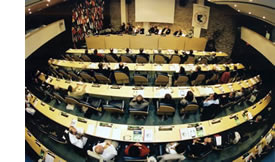 The approval procedure, which applies to all EPPO regional Standards, may be summarized (see Figure 1) as follows: the Panels draft PP1 Standards which are submitted to all Member Governments in a consultative phase. The Secretariat of EPPO redrafts the Standards in consequence, for final approval by the Working Party, which then submits them to the Executive Committee and Council of EPPO to be accepted and recommended to all Member Governments. Note that Standards considered by the Working Party to be in need of revision or updating, enter the same sequence of consideration, beginning with expert Panel review and finalized by approval at EPPO Council.

In summary, the Working Party decides the format and establishes general policies for Standard preparation (sequence, level of detail, etc.). The Working Party having decided that a certain Standard should be prepared, tasks the Secretariat to prepare a first draft in the standard format; the source may be a national standard or a draft specifically prepared by a Panel member or by the Secretariat. This first draft is examined in detail by the appropriate Panel whose members may consult with any appropriate specialists. The Panel may be able to finalize its approved version of the draft at one meeting, or this operation may extend over two or more meetings, with appropriate consultations. When the Panel has agreed its version, the Secretariat submits it to all Member Governments for comment and criticism.

In the consultative phase, specialists in the NPPOs of the Member Governments consider the Standards and send any comments and criticisms to the Secretariat, which adjusts the text accordingly. The Secretariat is not obliged to make changes to take account of a comment, but it generally attempts to do so since the objective is to make the Standards clearly acceptable to all Member Governments. If the comments are inconsistent with the Working Party's general policies, the change will generally not be made, but the point will be raised as appropriate at the next Working Party meeting. Comments of a very substantial or technical nature may lead the Secretariat to decide that a Standard requires more work at Panel level.

Standards approved by the Working Party are then proposed to the Executive Committee and Council of EPPO for final approval. Passage through these two bodies in succession is prescribed by the Convention and Rules of Procedure of the Organization, and the respect of these rules ensures that every possibility is given for Member Governments to register their comments or criticisms. Although, in theory, the decisions of the Executive Committee and Council are by simple majority vote, decisions on EPPO Standards are taken by consensus. In other words, objection by a single country is considered a sufficient basis for sending the Standard concerned back to the Working Party. In this case, Council might decide upon special procedures for approval of this Standard.

Figure 1. Pathway for the development and approval of a PP1 Standard 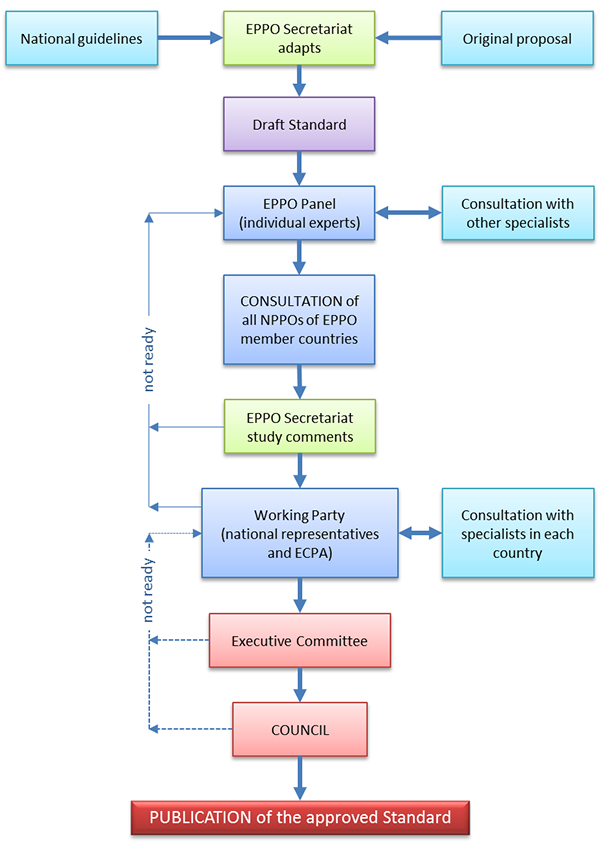